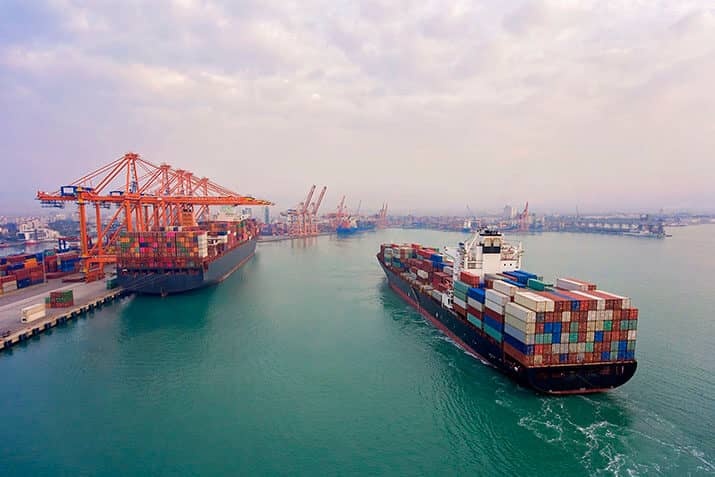 For restaurants, the challenges spawned by the pandemic just keep coming.

Amid a historic labor shortage and rising food costs, the concurrent supply chain disruptions may be the most frustrating of all, just as they are rebuilding in the aftermath of COVID-19 restrictions.

Is there an end in sight? And what can you do to mitigate the fallout in the meantime?

To see where the supply chain issue is headed, let’s review how we got here in the first place.

The pandemic hammered consumer spending on experiences like vacations and dining out. Instead, that money (plus the federal stimulus payments to families) fueled a boom in consumer spending on imported goods, driving up the demand for container ships headed to American ports. But Americans in lockdown produced fewer goods for export to Asia, creating imbalances in the supply of vessels and containers that sent freight prices even higher.

America’s ports became (and remain) overwhelmed with ships and containers thanks to another bottleneck: the perennial shortage of long-haul truck drivers. Without drivers, those containers sit in place at ports like Long Beach, further clogging the system and contributing to a scarcity of available containers in exporting countries.

How bad is the port congestion?

“The Port of Long Beach gets a lot of publicity. During the labor strike in 2015, we saw 45 or 47 container ships dwelling in port. We recently smashed that record. I think it went north of 90 ships,” says Brian Van Ausdle, Senior Director Global Logistics at Simplot.

As reported by project44, the average days of delay between Yantian, China, and Long Beach rose 425% between August 2020 and August 2021, largely thanks to port congestion. Every day these ships sit at anchor effectively removes their capacity from the market, adding upward pressure on freight costs. To wit, spot shipping rates between China and the West Coast have risen 4.5 times in the last year.

Meanwhile, Sea-Intelligence reports that carrier reliability has reached an all-time low of just 33.6% in August 2021.

So what do global container ships have to do with your french fries?

At first glance, the global supply chain crisis would seem to have little to do with domestically-produced restaurant menu items like fries. But the surge in imports has strained the entire U.S. logistics infrastructure, drawing away truck and rail capacity from domestic manufacturers like Simplot, not to mention the farmers who grow the crops we process.

While bottlenecks have sprung up throughout the transportation system, the shortage of truck drivers is the most pressing. More than 70% of U.S. freight travels by truck. According to a new study by the American Trucking Associations, the deficit of drivers will hit a historic peak of 80,000 in 2021, up over 30% in the last three years. They estimate 1,000,000 new drivers will need to be recruited over the next decade to replace retiring drivers.

“In terms of refrigerated demand, there are 12 refrigerated loads that need to move for every seated truck, meaning a refrigerated truck and a driver to go with it. Before the pandemic, we had sufficient capacity to move all of our loads and, if anything, we had surplus trucking capacity,” Van Ausdle says.

“We’re still in a deficit position when it comes to drivers and the demand has increased because of changes in consumer behavior,” explains Van Ausdle. “Inventory stocks were drawn down as well, so the demand is two-fold. We’re trying to gain ground on depleted inventories across industries, so there’s just more demand for stuff that has to go in a truck.”

“Labor problems disrupt appointments on both the origin and destination. If a carrier struggles to get an appointment at either end of a shipment, they won’t wait for the issue to be resolved because they have so many opportunities to haul freight. They’ll move on, so it’s a chain reaction. You have disruption at the warehouse, but then you also end up with a carrier issue,” says Van Ausdle.

The combined effect of these factors—literally from farm to table—has created unprecedented shortages and price spikes for many restaurant supplies, from spices to cleaning supplies.

What Simplot is doing to mitigate supply chain disruptions for customers

Simplot’s preparation for supply chain disruptions began long ago. Brian Van Ausdle and his logistics team have spent years developing relationships and strategies to ensure the company’s customers get their products on time and at a reasonable cost, no matter what’s happening.

Their “portfolio approach” to logistics ensures Simplot has alternative options available when capacity tightens up or weather hits.

As reported last summer, the measures the company has taken include:

As the shortage of long-haul trucking became more acute in mid-2021, Van Ausdle and his team added a new wrinkle to Simplot’s response: converting part of their regional fleet of trucks to over-the-road service in a bid to support customers whose supply of fries had dwindled to emergency levels.

“Because of the priority we put on service, we converted our rigs with day cabs to ship over the road, which is a first for us. These customers would have ultimately run out of fries at the restaurant level if we hadn’t gotten innovative,” he explains.

The extra measures the company is taking are paying off: “We’re getting feedback that we’re performing well, relatively speaking,” says Van Ausdle.

Weighing the supply-chain uncertainty ahead

If you’re desperate for the supply chain to straighten itself out, you’re not alone. Forty-five percent of businesses said they are having domestic supplier delays, up from 26.7% at the start of the year, according to a recent U.S. Census Small Business Pulse Survey.

So, when is this all going to end? It’s a question Van Ausdle gets a lot.

The global picture is still cloudy: “President Biden has extended terminal operating hours to include weekend and overnight to relieve some of the congestion,” Van Ausdle explains. “The problem is that it requires all participants in the supply chain—terminal operators, distribution centers, trucking companies, rail, importers—to be willing to incur incremental expense to ensure we de-bottleneck the ability to import goods. Unfortunately, that has actually gotten worse since summer. And the new ships under construction won’t come online until 2023.”

Furthermore, the labor contract for dockworkers is due to expire on July 1, 2022, which could lead to a replay of the 2015 strike and the logistics disruptions that followed.

The shortage of drivers is likely to continue. “Drivers tend to be older and it’s not often an attractive job for young people early in their careers. They don’t want to be away from home the way over the road driving requires. Also, the driving schools shut down during COVID because of the proximity in the cabs and restrictions. And there were good alternatives for the folks who had driving jobs. They found employment in the construction industry, and a lot of them just haven’t come back.”

Another trucking wildcard? The effect of vaccine mandates on drivers. The American Trucking Associations estimates up to 37% of drivers may choose to leave their job or retire to avoid mandatory vaccination.

What restaurants can do to cope with the supply chain crisis

As daunting as these challenges are, Van Ausdle reminds customers that they are not powerless to address them.

“Carry extra safety stock and allow for longer lead times on orders. But, most of all, communicate what your plans are,” he advises. “If we understand where you’re headed, we can plan more effectively for your needs and provide better service.” 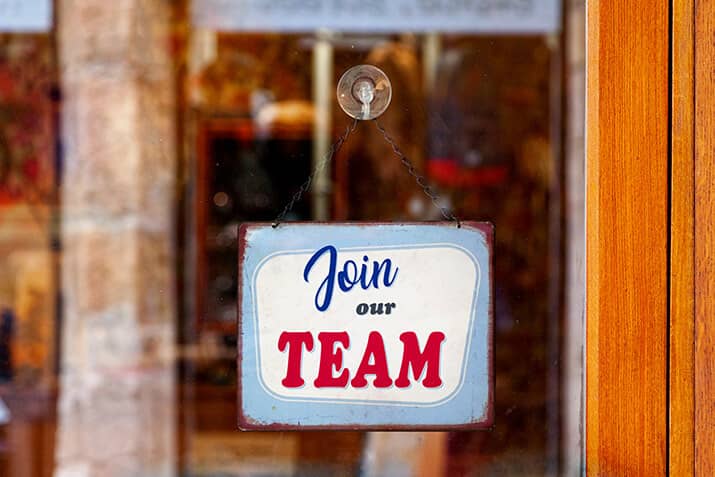 Restaurants have always had relatively high turnover, but the stresses brought on by COVID-19 have made hiring employees even more challenging. So given these historic headwinds, how can you attract—and keep—the people you need to operate? 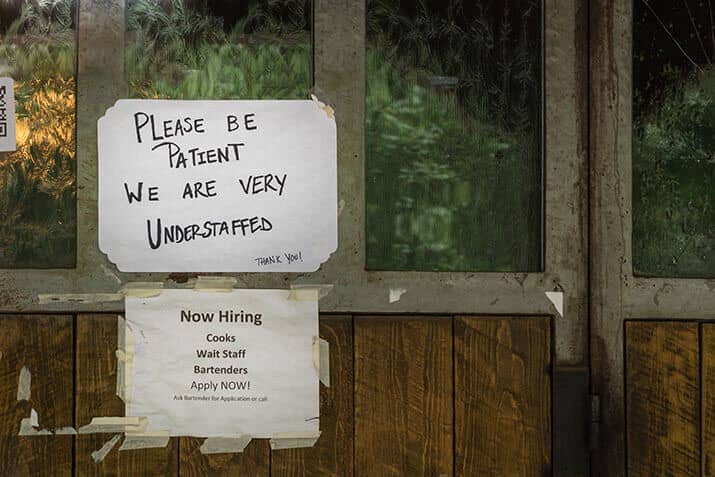 How Restaurants Can Adapt to a Smaller Workforce

Keeping and finding workers is likely your top challenge right now, and it doesn't look like that's going to change any time soon. Here we offer some ideas and resources to help you adapt to a smaller pool of workers. 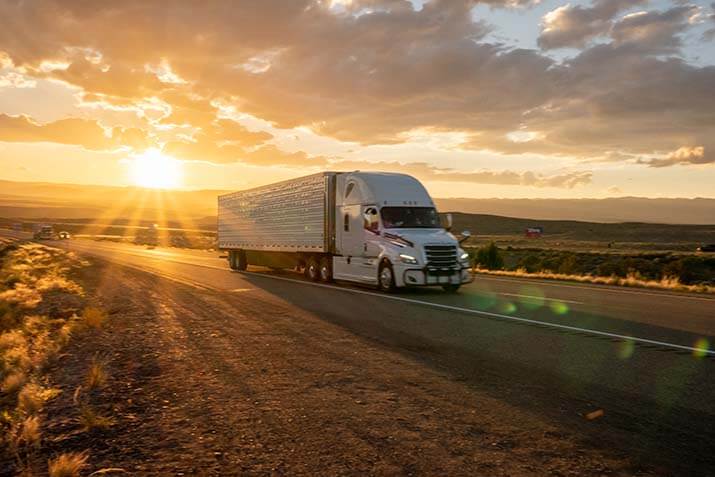 How the Global Supply Chain Crisis Affects You and Why

Even as diners return to restaurants in the U.S., a perfect storm of supply chain issues has led to unwelcome new challenges for operators: product shortages and hefty freight charges.